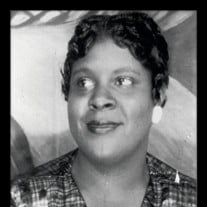 Agnes Louise McDowell was born June 1, 1933, in Saint Louis, Missouri to her parents, Mr. Orbie and Thelma Brown. Her parents, along with her brother Orbie Brown Jr., her first husband Fred Johnson, one son Fred Jr., a special friend Mr. Morrow Wells, and her last husband of many years together Charles McDowell, all preceded her in death. Agnes attended Jefferson School. Later in her life, she enjoyed working in Home Health Care. Taking care of people became one of the greatest challenges in her life. She loved doing what she could to make them feel so much better during their illness. A little later on up the road, Agnes decided to attend O’Fallon Technical School of Nursing, after graduating, she began a new life working at several nursing facilities. Agnes met no strangers, she was always so friendly and was liked by everyone she came in contact with. All of her patients loved her because she would keep them all laughing, and for her to use a few specialty words was just part of her vocabulary it was something we got used to hearing, she was hilarious. After many years of working at Little Sisters of the Poor Nursing Home, Agnes retired at the age of 80 years old. As her health began to fail, and she could no longer live in her home, she moved to the Stone Bridge Senior Living. To cherish the fond memories of Agnes McDowell are: her grandchildren Lamar and Verdell Brown, her great-grandchildren Savail and Seth Brown, her daughter-in-law Mary, all of California; her niece Mozella Henson, her great-niece Valerie Henson, Sharon H. (Jerome) Morris, Janet (Gregory Thomas) Henson, Tina M. Henson, Earlie (Claudia Doll) Henson III, Keith A. Henson, and Renard L. (Monica) Henson all of Saint Louis, Missouri, a very close sister in Christ and great best friend of Agnes, Celestine Beaird of Saint Louis, Missouri, her other nieces, nephews, and many other friends including the nursing family facility of Stone Bridge.

The family of Agnes Louise McDowell created this Life Tributes page to make it easy to share your memories.

Send flowers to the McDowell family.