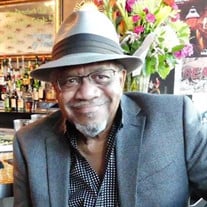 Albert R. Cummings, Sr., age 80, of St. Louis, Missouri, passed away Monday, February 22, 2021, at his home following a short illness resulting from congestive heart failure. Albert was born on October 27, 1940, in Fort Scott, Kansas to Cleo Mae (Jenkins) Cummings and Booker T. Cummings. He graduated from Fort Scott Junior College in 1960 as valedictorian of his class and subsequently attended Kansas State College of Pittsburg (Pittsburg State University) where he received a bachelor’s degree in mathematics with a minor in chemistry. While considering many job offers, Albert chose one as a cartographer with the Department of Air Force, a highly-classified government position. During the Vietnam War, he was drafted into the army and served as a computer programmer at Fort Mason, California. Following his army duties, Albert returned to his job in St. Louis, Missouri and was offered an opportunity to attend Washington University full time. There, he completed a Master’s Degree in Applied Math and Computer Science, graduating in 1971. After graduation, Albert was recruited by Ralston Purina in St. Louis as an Operations Research Analyst. While at Purina, he completed his MBA at Southern Illinois University (SIU) Edwardsville (1974) and became a part-time Assistant Professor of Management Science at SIU. During the mid-’70s, Albert was recruited by Anheuser-Busch in St. Louis, Missouri. He spent almost twenty years there and held a number of positions, including Manager of Market Analysis and Manager of Sales Forecasting before eventually becoming Brand Manager for a new malt-liquor product (King Cobra) that he managed from concept stage to national distribution. After retiring early, Albert was recruited by Heileman Brewing Company, and worked both in Chicago and Detroit before returning to St. Louis. To occupy his time after his return, he worked part-time as an academic advisor and adjunct professor in the Walker School of Business & Technology at Webster University. Albert retired fully from teaching in 2017. In addition to his parents, Albert was preceded in death by a son, Albert R. Cummings, Jr.; brothers Gardner and David; and a sister Maxine. Left to cherish his memory is his former spouse and mother of his children, Wava (Gatewood) Cummings; his loving daughters Simone Cummings (Don Lawrence) of St. Louis, Missouri and Valerie Zanders (Mickah) of Jonesboro, Georgia; and five granddaughters: Nina Lawrence, Madison Lawrence, Riley Zanders, Shelby Zanders, and Alyssa Cummings. Also surviving are a sister, Laverne Person of Olathe, Kansas, and three brothers: Charles Cummings of Fort Scott, Kansas; Jerry Cummings of Sacramento, California; and Phillip Cummings (Mary Ann) of Oklahoma City, Oklahoma. Albert was a Life Member of Alpha Phi Alpha Fraternity and over his lifetime was active in a variety of organizations including the Rainbow Chamber of Commerce of Greater Saint Louis as its first Executive Director; the NAACP; the Anheuser-Busch Employees Credit Union (Board member); and the St. Louis Public Schools Desegregation Committee. A memorial service will be held for Albert later this spring. Interested parties may contact Simone Cummings at [email protected] for additional information.

The family of Albert Cummings created this Life Tributes page to make it easy to share your memories.

Send flowers to the Cummings family.