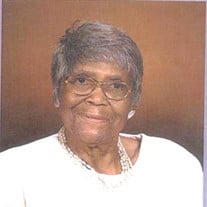 Amy Cobb Gaines was born on June 13, 1920 into the happy family of Rev. Arthur Mitchell Cobb and Mrs. Ollie Whitney Cobb where four (4) sisters and one (1) brother eagerly awaited her arrival. Her parents, sisters, and brother all transitioned from this life before her. Amy was a Preacher’s Kid (PK) who grew up in old St. Paul at Lawton and Leffingwell Avenue. Her mother, Stewardess Ollie Cobb, made sure she was involved in the church. She sometimes traveled with her father, Rev. Cobb to play praise and worship songs at his assigned churches in Wellsville, McKitrick, and Warren, Missouri. Whenever she was at home-she could be found at St. Paul A.M.E. At the age of 12 Amy officially joined St. Paul and was baptized under the leadership of the Rev. Noah Williams and sang in the Children's Choir. She later graduated to the Intermediate Choir, participated in the Conference Choirs, and finally served in the Chancel Choir; in total she dedicated over (75) years in the Music Ministry of St. Paul A.M.E. Church. Music was very much a part of Amy's life. Note: her older brother, Maestro Oliver Cobb, was a renowned St. Louis jazz musician (Cornetist) in the 1930’s, and played with several local groups along with Eddie Randle, Sr., founder of Randle Funeral Home. She and her parents made certain all family children were involved in music (piano/voice/instruments.) Amy was educated in the St. Louis Public Schools and attended Lincoln, Waring and Vashon High School. In the 50’s she enrolled and graduated from Muriel Davis School of Cosmetology. After graduation her parents assisted her in opening a Beauty Shop. Amy thought it best to open the shop in her home to be close to her children. Her passions for people later led her to St. John's Mercy Hospital followed by Department of Veterans Affairs (John Cochran Medical Center) from which she retired. Following retirement she worked several Senior Program jobs and became the Music Instructor for the Children's Choir during Vacation Bible Schools. Also, she was a member of the Beacon Bible Class and served as Class Leader for Class #6 for many years. Amy love to cook, sew, travel…&…host Family Gatherings and Picnics (OMG!!!) She simply loved to have fun and her greatest joy was to make people laugh (her sharp mind and quick wit made that a common practice.) Her two (2) favorite songs were: “Did You Stop To Pray This Morning”…&…“He Touched Me.” She often recited the words to “If I Can Help Somebody” while ministering to or encouraging others; in fact that song became a Mantra in her life, which she also enjoyed singing. From Amy's previous marriages to Archie B. Hill and Vernon Gaines…she leaves to cherish her memory–Children: Archie Mitchell Hill (Ida;) Vernona O. Gaines-Smith; the late Angela V. Gaines-Evans and Vernon J. Gaines (Adrienne.) Grandchildren: Wayne A. Smith, Sr., Mona Smith-Thomas, E. Keith Evans, Monica L. Evans, Antoinette, Alycen and the late Felicia Hill. And… (14) Great-Grandchildren, (3) Great Great-Grandchildren; (1) Nephew (Oliver Cobb, Jr.,) several Great Nieces and a host of Cousins and Friends-all precious flowers in her Garden of Life. ***Note: Amy prepared her own biography for inclusion in her “Home Going Celebration of Life” more than 30 years ago. Her closing statement was: “May God bless my remaining family!!!”

Amy Cobb Gaines was born on June 13, 1920 into the happy family of Rev. Arthur Mitchell Cobb and Mrs. Ollie Whitney Cobb where four (4) sisters and one (1) brother eagerly awaited her arrival. Her parents, sisters, and brother all transitioned... View Obituary & Service Information

The family of Amy Cobb Gains created this Life Tributes page to make it easy to share your memories.

Send flowers to the Gains family.