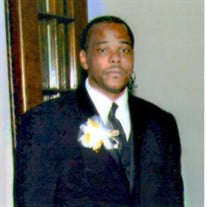 Anthony Terrell Clay Sr. was born May 24, 1974 to Joseph Brooks and Dorothy Clay in Saint Louis, Missouri. He passed on August 12, 2017. His father Joseph Brooks, his brothers Joseph Brooks Jr. and Anthony Brooks, his uncle Wade Clay, and his grandmother Gertha Mitchell all preceded him in death. He attended Greater Saint Matthew Missionary Baptist Church where he accepted Christ at an early age. Anthony was Educated in the Saint Louis Public Schools attending Sumner High school where he played football. Anthony was a sweet, loving, and caring man. If you know him, you knew him by his smile and joning sessions. When you walked in the room, he would crack jokes as soon as he heard you. Anthony loved sports, his family and his friends. He also loved to dress to impress, “couldn’t tell him he didn’t look good.” Anthony worked at Gray Moving Company for over 10 years. He leaves to cherish his memory: his mother Dorothy Clay, his children Antoinette (Evan) Smith, Antonio Clay, Terrell Clay, and Antia’jah Clay; his grandchildren Alyssa Franklin, Aiden Smith and Peyton Smith; his twin brother Antoine Clay Sr.; his sisters Patricia (Tony) Hayes, Mary Brooks, and Chantel Russell, and a host of aunts, cousins, nieces, nephews, and friends.

The family of Anthony Clay Sr. created this Life Tributes page to make it easy to share your memories.

Send flowers to the Clay family.