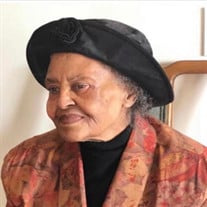 Bernetta Louise Salonies, 81, of Wentzville, Missouri departed this life surrounded loved ones and music. She passed away at 10:00 A.M. on October 31st, 2020 at St. Joseph Hospital in Lake St. Louis. Bernetta gave her life to Christ at an early age and was baptized at Rock Chapel A.M.E. Church in St. Louis on June 8th, 1947. She attended many churches of various denominations throughout her life. She was a very fine student and was even awarded a partial scholarship to attend Tuskegee Institute in Alabama. Unfortunately, she was not able to attend and became a seamstress. However, during an opportunity to work in retail, Bernetta discovered that she enjoyed helping and talking with people. She was eventually hired at Walmart in Wentzville in 1979 where she faithfully remained until she retired in 2001. Bernetta briefly moved to the mountains in Colorado before returning to Wentzville to continue to enjoy her family and friends during retirement. Her life was a true example. She was a first lady, a devout church clerk, and a friend to many. She was greatly loved and will be missed by all who knew her. A service will be held on Saturday, November the 7th at 10:00 am at Eddie Randle & Sons Funeral Home with Dr. Ednorleatha Long officiating. Interment will follow at the service at Grant AME Cemetery in Wentzville, MO. Due to COVID restrictions, services are limited to immediate family only. Bernetta is survived by her daughter, Treavor Marshall and her husband Robert of Smithton, IL; son Craig Salonies and his wife Mikah of Wentzville, MO; stepdaughters Evelyn Hunter of Trenton, MI and Cecelia Salonies of Chicago, IL; grandchildren Jameeliah Prophete, Robert Marshall Jr., Janeeta Marshall, Karsen Salonies and Will Salonies and 10 great-grandchildren. She is also survived by many adored nieces and nephews as well as friends, including her long-time friend Cindy Galati. Bernetta Louise White was born in St. Louis Missouri on February 17, 1939, to the late Marguerite L. (White) Armour and James H. Juhan. She was raised by her grandfather William White. Bernetta first married Freeman Lee Coleman in 1959 who preceded her in death in 1967. Bernetta then married Reverend Edward Salonies in 1969 who preceded her in death in 1972. Bernetta was also preceded in death by many other loved ones, including her son Edward Salonies, Brother Donald

Bernetta Louise Salonies, 81, of Wentzville, Missouri departed this life surrounded loved ones and music. She passed away at 10:00 A.M. on October 31st, 2020 at St. Joseph Hospital in Lake St. Louis. Bernetta gave her life to Christ at an... View Obituary & Service Information

The family of Bernetta Salonies created this Life Tributes page to make it easy to share your memories.

Send flowers to the Salonies family.