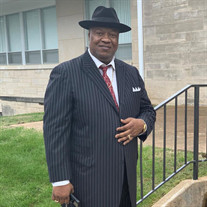 Carl S. Smith, Sr. was born November 10, 1955 in St. Louis, MO. to the Union of the late Dewitt Smith, Jr. and Lula Mae Smith both of whom preceded him in death. He was the 4th of 5 children, his youngest brother Timothy P. Smith preceded him... View Obituary & Service Information

The family of Rev. Carl Stanley Smith Sr created this Life Tributes page to make it easy to share your memories.