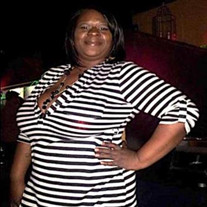 Carolyn Marie Noble, daughter of Carolyn Harrold and Sylvester Noble and step-daughter of Richard Glenn, was born March 06, 1978, in Saint Louis, Missouri. She attended both Sumner and Riverview Gardens High School. Carolyn later received her degree as a Medical Assistant and worked in nursing homes until she was no longer able to. Carolyn lived her life with GOD on her side and at an early age, she professed her faith in Jesus Christ with her baptism at Rock Chapel. Carolyn followed the preaching and teachings at Kingdom Living Ministries until her final moments. Carolyn was an awesome daughter, sister, and aunt. She was blessed with three children of her own, Carlos Noble, Cortez Noble, and Cormen Noble, but loved her nieces and nephews like they were her own. For her youth, she was a part of the Memorial Lancer Drum and Bugles Corps as a color guard. She continued to assist with her brother Drum and Bugles Corp the Royal Lancers and also involved her children as members. Carolyn loved her family and was very involved with them. Carolyn was a nurturer and was known for her fighting spirit. Carolyn was a breast cancer survivor and even when the cancer returned, she continued to fight until she departed this life Tuesday, November 02, 2021. She was preceded in death by her brother, Dennis Noble, her sister, Karen Harrold, her maternal grandparents, Doris and Edward Harrold, and paternal grandparents, Hazel and Sylvester Noble. Her beautiful life will forever be cherished in the lives of her mother and father: Carolyn and Sylvester; step-father: Richard; sons: Carlos 16 years old and Cortez 13 years old daughter: Cormen 6 years old; sisters: Marilyn, Kimberly, Regina, Brittany, and Rena; brothers: Antonio Sylvester Jr. and Sylvester; and a host of devoted nieces, nephews, aunts, uncles, cousins, and friends.

The family of Carolyn Noble created this Life Tributes page to make it easy to share your memories.

Send flowers to the Noble family.