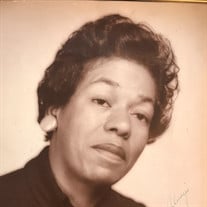 Carrie Arnetta Tyson Davis, affectionately known as “Sister” was born in Pine Bluff, Arkansas on December 3, 1925, to the late George and Carrie Spencer-Tyson. Both her parents, and four brothers, George, Samuel, William, and John Tyson preceded her in death. At an early age, Carrie professed a hope in Christ as a member of Cleaves Chapel C.M.E. Church (on 2nd Street), now Murchison Tabernacle C.M.E. Church. Carrie Tyson Davis served as the church‘s secretary for many years and also served on the Senior Usher Board. In September 1961, she met and married the love of her life, Clifford Davis; to this union, there were no children. She was educated in the St. Louis Public School System. Following graduation she started working at the Military Personnel Records Center, Army Division at 9700 Page Blvd. and retired as a supervisor after 35+ years. Carrie Davis loved her family. She cherished her nieces and nephews as her children. She was loved by all she affiliated herself with. She had two very close and special friends, Sis. Ethel Morris and Sis. Lois Fields of more than 50 years. Carrie Davis attended and supported her church until her health began to fail. She loved her church and her church family and did everything she could for the service of the Lord. After a courageous battle, Carrie Davis transitioned to final rest in the arms of God with her family by her side on Thursday, December 28, 2017. She leaves to cherish her memory, her husband of 56 years, Clifford Davis, three nieces, Jean Tyson of California, Betty (Elvin) Vaulx, Carol Tyson-Fredreu (Huey), a nephew, Rev. George (Margary) Tyson, great-nephews, John (Darcel) Tyson, Darryl (Crystal) Tyson, great nephew, Perry Tyson, a host of other great and great-nieces and nephews, three godchildren, Valerie Harper, Cheryl Caldwell-Johnson, and Kim Fields and her church family.

The family of Carrie Davis created this Life Tributes page to make it easy to share your memories.