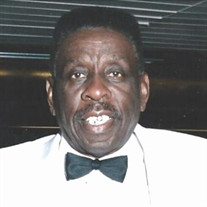 Mr. Charles Jackson was born October 1, 1925, in Natchez, Mississippi to the union of John Jackson, Sr. and Susie Flowers. He was preceded in death by his parents, all of his siblings Augustine, (Jennie), Mary, Marguerite, John Jr. (Son) and Earnest, as well as his three sons, Lorenzo, Chauncey and Forrest and one daughter-in-law, Karen Jackson. In the mid-1960’s Mr. Jackson rededicated his life to Christ (from his childhood) at Good Hope Baptist Church (St. Louis). While raising all his children in the church along with their mother (Irma Jackson). Mr. Jackson became the lead singer in the #2 Church Choir and served as the head maintenance personnel. In 1973, he moved his family and membership to Progressive Baptist Church under the leadership of Rev. Joseph D. Linton where he served God and the members proudly as the only” male on the Usher Board. As his children became adults and move their own memberships to other churches, Mr. Jackson visits a few churches but remain on the membership roll at Progressive Baptist Church. In 2009, Mr. Jackson retired from St. Louis University after 22 years of employment. He also was a former member of the Mason Organization in his earlier days. After his son, Patrick, became a 33 Mason, he vowed many times, if his health got better he would try to get active again. In July 1989, Mr. Jackson married the love of his life, Brenda (Hamilton) who survives him along with thirteen (13) children: Anthony, Mattie, Charles Jr., Howard, Yvonne, Brian (Janice), Cedric (Diane), Charmaine (James) (all of St. Louis), Carlos (Barbara) (Atlanta, Ga.), Sam (Linda) (Dallas, Tx.), Scarlet( Portland, Or), Feldon (Cheryl), Lisa (Ray) (both of St. Louis), and Patrick (Sherri) (Shiloh, IL.) Mr. Charles Jackson went home to be with the Lord on August 8, 2018. He leaves to cherish his memory: his devoted wife, his children, grandchildren and great-grandchildren whom he loved with all of his heart and a special nephew, Luther (Verline). He also leaves a host of beloved nieces, nephews, family, and friends.

Mr. Charles Jackson was born October 1, 1925, in Natchez, Mississippi to the union of John Jackson, Sr. and Susie Flowers. He was preceded in death by his parents, all of his siblings Augustine, (Jennie), Mary, Marguerite, John Jr. (Son) and... View Obituary & Service Information

The family of Mr. Charles Jackson created this Life Tributes page to make it easy to share your memories.

Send flowers to the Jackson family.