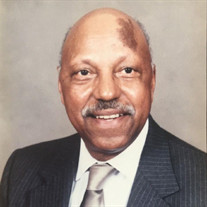 The passing of Mr. Claude Benjamin Elazer has called us together today. An Angel form walks o’er the earth with silent tread and bears our loved ones away, and then we call them dead, but they are ever near us, though unseen. Their immortal spirits tread; for all the boundless universe is life; there is no death, the Giver just takes back His loved ones unto Himself, after they have wrought such beautiful pattern during their sojourn here. Claude Benjamin Elazer was born on August 1, 1922, in Detroit, Michigan, the first child born to the union of Benjamin and Josephine Elazer. Claude graduated from Douglass High School in Webster Groves, Missouri in 1940. He enlisted in the U.S. Army in 1942 and served as a Supply Technician. He was honorably discharged in 1945. Claude was chosen to join other senior military veterans on an Honor Flight to Washington, DC, to view the memorials built in their honor. This trip was one of the highlights of his travels. Claude was united in Holy Matrimony to Willa Mae Peery, and to this union was born their daughter, Linda Marie. Together they raised three children, Althia, Melvin, and Linda. Claude participated in the Management Training program for Minority Business Managers at Washington University from 1969 to 1971 and went on to complete a program in Practical Accounting in 1979 at Florissant Valley Community College. He was employed by the U.S. Government for 9 years, where he held various positions with The Army Records Center, The Army Finance Center and the Department of Agriculture from 1946 to 1955. Claude later worked for the St. Louis Public Schools as a Business Office Manager and served in this capacity at Soldan, Vashon, and O’Fallon Technical Center. He was promoted to Supervisor of the Warehouse and Distribution for the St. Louis Public Schools and retired from this position in 1986. Claude and his wife, Erma were united in Holy Matrimony for 28 years. He was a devoted husband, father, stepfather, grandfather, great-grandfather, brother, and uncle. They loved him for his wisdom, patience, and compassion. Claude was a faithful member of Cote Brilliante Presbyterian Church for over 58 years and served in many capacities. Claude loved to study the Word and attended the Men’s Bible study every Saturday morning. He was a man of God and loved his church family. Claude was also an active board member of the George Washington Carver House. He was a member of the Couple’s Club, and he enjoyed the fellowship with the Wednesday Breakfast Club. He was an avid Cardinals fan and enjoyed watching all sports in general. Claude and Erma enjoyed traveling, especially cruises and trips with their church family and Couple’s Club. Claude went home to be with the Lord on Sunday, May 27, 2018. He was preceded in death by his parents, sister, Connie Thompson, brother, Tommie Elazer, son, Harry J. Lawrence, Willa Mae Elazer and their daughter, Linda M. Elazer-Davis. Claude leaves to cherish his memory: his devoted wife, Erma Elazer; daughter, Bonita White; stepchildren, Althia Tweiten, Melvin Reed (Sandra), Dr. Jacquelyn Lewis Harris (Wright), Paul Lewis (Karen), Matthew Lewis and Peter Lewis (Muquita); grandchildren, Darrell Lawrence (Sharon), Derrick Lawrence, Anderson White lll (Debra), Dr. Maya Barfield (Adrian) and Jocelyn Davis; niece, Carol Sue Wallace; brother-in-law, Alexander Johnson ll; a host of beloved grandchildren, great-grandchildren, nieces, nephews, great nieces, great nephews, family and friends.

The passing of Mr. Claude Benjamin Elazer has called us together today. An Angel form walks o&#8217;er the earth with silent tread and bears our loved ones away, and then we call them dead, but they are ever near us, though unseen. Their... View Obituary & Service Information

The family of Claude Benjamin Elazer created this Life Tributes page to make it easy to share your memories.

The passing of Mr. Claude Benjamin Elazer has called us together...

Send flowers to the Elazer family.