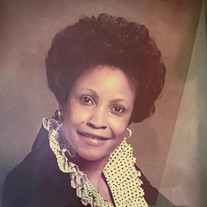 Claudia “Pat” Ingleton was born July 31, 1940, to James Lewis and Josephine (Lee) Lewis-Neal in Saint Louis, Missouri. Two sisters preceded her in death, Peggy Miller, Alberta Neil, and one brother Robert Lewis. She was previously married to Prentice Taylor Jr. to which marriage one child was born, Prentice Taylor III. On April 5, 1969, she married Frederick Ingleton. She was educated in the St. Louis Public School System. She worked as an accountant for United States Fidelity and Guarantee Company. Pat as she was affectionately called, professed a faith in Jesus Christ and was baptized in April 1954 at Southern Union Baptist Church. She joined Corinthian Baptist Church February 22, 1970, and was a faithful member until her health prevented her from attending. Pat served as President of the Usher Board for many years. She was called “Drill Sergeant” by its members if late for service or if the uniform was not correct. She was a member of the Senior and Gospel Choirs, the Finance Committee, and Church Clerk. Pat was an avid St. Louis Cardinals Baseball fan. She even took a transistor radio with her to the games. She was called home to be with the Lord on August 16, 2020. She leaves to mourn her homegoing: her son Prentice Taylor III and devoted daughter-in-law Lisa Taylor, three grandchildren Alicia, Robert and Rodney Taylor, one great grandson; five step children Debbie, Frederick Ingleton Junior (New York, New York) Charles Andrew Ingleton, Sheila Ingleton, Frederick Ingleton Jr. (St. Louis, Missouri); one sister-in-law Susan Ingleton, and a host of nieces, nephews, neighbors, and church family.

The family of Claudia "Pat" Ingleton created this Life Tributes page to make it easy to share your memories.

Send flowers to the Ingleton family.