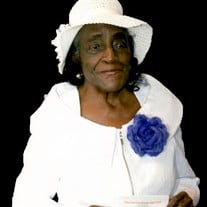 Daisy B. Edwards was born on August 27, 1925, in Peoria, Illinois. Her parents Mollie Mitchell Patterson and Edward Patterson, her sister Mary P. Jefferson and brother Emmett Carter all preceded her in death. She was educated in the public school system of St. Louis, graduating from Vashon High School at the age of 16 in June 1942 and completed secretarial certification in June 1943 at Washington Technical School. From June 1943 to July 1946 she was employed by the Federal Government in Washington, D.C. and also volunteered as a USO hostess and performed with her partner Geraldine Berry as a Tap Dancer in the USO Camp Shows in Maryland and Virginia. In August 1946 she was united in marriage to Frank Eugene Dunbar. To this marriage two daughters, Wandaleen and Myrle and one son Frank Jr. were born. On January 4, 1976 Daisy and William Edwards Jr. were united in marriage at First Free Will Baptist Church. Daisy retired from the Military Personnel Records Center in January 1982 after completing 30 years of service as a Federal Employee. She was an active person and a league bowler for 28 years, a member of the Monsanto YMCA Crystalette Senior Dancers from 1986 to 1994 and continued participation in the Senior Fitness Program at the Monsanto Y until her death. She served as the Church Clerk for First Free Will Baptist Church for a number of years, was secretary of the Board of Directors of the Friends of Julia Davis Branch Library and the Financial Secretary of the Throwing and Growing Foundation. She was the Oldest Female Thrower in the state of Missouri. She participated in the Missouri State Senior Games winning 16 Gold Medals 2013-2017, throwing the Shot Put Discus, Javelin Hammer & Weight Throw. She departed this life on October 3, 2018. She leaves to mourn: her husband William Edwards Jr, her daughters Wandaleen Dunbar Harris Brown and Myrle Dunbar Mensey Symonds (Greg); her son Frank Eugene Dunbar Jr.; two grand-daughters Veronica L. Harris and Olivia Michelle Cox; two grandsons Aaron E. Mensey Jr. and Frank E. Dunbar III; seven great-grandchildren Wandaleen, Abdiel, Basia, Tirzah, Midori, Sy and Everett; family friend Odell Stringer, and a host of nieces, nephews, family, and friends. Burial will be in Calvary Cemetery in the same grave where her mother Mollie Patterson was buried on July 18, 1986, at the age of 99 years and 9 months.

Daisy B. Edwards was born on August 27, 1925, in Peoria, Illinois. Her parents Mollie Mitchell Patterson and Edward Patterson, her sister Mary P. Jefferson and brother Emmett Carter all preceded her in death. She was educated in the public school... View Obituary & Service Information

The family of Daisy B. Edwards created this Life Tributes page to make it easy to share your memories.

Send flowers to the Edwards family.