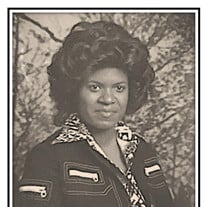 Dale Campbell (Wallace-Diggs) was born on May 18, 1952, to Lucius Lee Campbell and Wilda Tea Rogers, in Saint Louis, Missouri. Her mother and father preceded her in death. Dale was the only girl out of seven children. Two of her brothers, Lucius Lee Campbell Jr. and Ronald Campbell also preceded her in death. Dale, at a young age, accepted the Lord and was a faithful member of Wayman Temple A.M.E. Church. Dale believed in getting a good education and excelling. She attended Beaumont High School and obtained her diploma. Furthering her education she attended Forest Park College and pursued a career in nursing. Dale worked as an LPN for multiple years. Dale at 20, married Abram Wallace in that union produced her one and only child Robin Star Wallace. After years of nursing, Dale then changed careers and began working for Bi-State (Metro) and retired from that company. During that time she remarried Wendall Kerry Diggs. Dale was always one to conquer her goals. After retirement, she started her own business, (“Now you see it. Now you don’t.’) From there she became a manager for Centaur for a couple of years until deciding to choose a life of travel and loving family and friends. Dale’s heart was full of unconditional love. She was a humble woman and never hesitated to lend a hand. She spent several years volunteering in the food pantry at Centennial Christian Church. Dale was diagnosed with metastasis breast cancer in 2013. Surviving back and shoulder surgery within weeks of each other. She fought strongly for 8 years. Dale was called home on April 21, 2021, in Ferguson, Missouri. Dale leaves to cherish her memories: Her only child, Robin Star Wallace; three grandsons, Jamie Martell Wallace, Lucian Jamel Wallace and Markus Lutrell Wallace; four brothers, Kirk Campbell, Bennie Campbell, Larry Campbell, and Mark Campbell; two sisters-in-law, Kim Hak Campbell and Mary Campbell; and a host of nieces, nephews, cousins, and friends.

Dale Campbell (Wallace-Diggs) was born on May 18, 1952, to Lucius Lee Campbell and Wilda Tea Rogers, in Saint Louis, Missouri. Her mother and father preceded her in death. Dale was the only girl out of seven children. Two of her brothers, Lucius... View Obituary & Service Information

The family of Dale Diggs created this Life Tributes page to make it easy to share your memories.

Send flowers to the Diggs family.