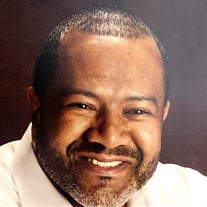 Demetrious “DeDe” Davis was born October 8, 1962, to Georgia Mae Phillips and Andrew Gunn. Following his birth, he was blessed to have been cared for and raised by Phil and Nettie Davis, who were loving parents and pastors of St. Peter’s House of Prayer located on Garfield in the Ville. DeDe was also the caregiver of his parents before they preceded him in death. His parents instilled the knowledge of God that was witnessed by his family and friends through his display of loving-kindness and his commitment to prayer. DeDe graduated from Charles Sumner High School and loved attending alumni functions with his friends and former classmates. He was employed with Cupples Rubber Co., Ford Motor Co., and last employed with ICL Americas. Shortly after high school in 1983, DeDe met the love of his life, Tracy Crigler, at the Riverfront Downtown St. Louis. DeDe being the jokester that he was, introduced himself as “Tony”. To continue the joke, Tracy continued to call him “Tony” throughout his life. DeDe and Tracy developed a strong bond and friendship which led to marriage. They enjoyed shopping together, traveling, entertaining friends and family at their home, going to various sporting events, and most importantly, parenting. DeDe was most proud of being an awesome father to Tyrone and Erica and absolutely enjoyed being Papa to his granddaughter Khloe. He took pride in making sure he was present in every aspect of his children and granddaughter’s lives. As a result of his kind-heartedness and infectious personality, he never met a stranger, and never was he a stranger to anyone he met. Not to mention, who could not resist his comedic spirit. DeDe was accepting of everyone regardless of their background and life choices. Childhood friends were maintained as lifelong friendships and seldom would you see DeDe without his childhood friend since the age of 10 and brother, Theodia “Champ” Alexander. DeDe also cherished Debbie, Champ’s wife, whom he referred to as “Debbie Lynn”, and being an uncle to their children. DeDe leaves to cherish his memories: his wife Tracy, son Tyrone, daughter Erica, granddaughter Khloe, mother Georgia Phillips, five sisters: Liz Beeks (Mark), Elise McCline (Cal), C. Renee Watson (Brian), Bridgette “Tammy” Deloach and Eureka Spencer, dear friends Theodia “Champ” and Debbie Alexander, three sisters-in-law: Jewel Crigler, Donna McNeil (Nathaniel) and Felicia Brown, and one brother-in-law, Walter Crigler (Leticia), his Crigler-McNeil family and Columbia, MO family. He also leaves to cherish a host of aunts, uncles, nieces, nephews, cousins, and friends.

Demetrious &#8220;DeDe&#8221; Davis was born October 8, 1962, to Georgia Mae Phillips and Andrew Gunn. Following his birth, he was blessed to have been cared for and raised by Phil and Nettie Davis, who were loving parents and pastors of St.... View Obituary & Service Information

The family of Demetrious “DeDe” Davis created this Life Tributes page to make it easy to share your memories.