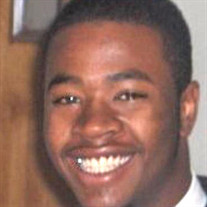 Dominick Reshaun Farmer entered this world with a bright smile on November 5, 1992 to Tia Elizabeth Buren and Reginald Lamar Farmer at Christian Northwest Hospital in Saint Louis, Missouri. Dominick was preceded in death by his maternal grandfather Eddie P. Buren, paternal grandmother Willie L. Farmer, and brother Rashad Farmer. Dominick “Nick” attended River Roads Lutheran, Hazelwood Central High School and Lincoln University. In 2019 Dominick received a certificate from Florissant Valley Community College for a Boeing Workforce Program in Assembly Mechanic. Subsequently, Dominick was employed by Boeing until his untimely passing. Dominick accepted Christ as his personal savior and was baptized at the age of 12 at Ebenezer Lutheran Church. Anyone who met Dominick was greeted by his “Big Ole” Pretty Smile. He would tell his momma that he was a “Legend.” He enjoyed sports. Specifically, basketball and baseball. He played AAU ball growing up. He also enjoyed dancing and would try to battle anyone. Dominick enjoyed spending time with his younger brother KJ and his Granny. He was looking forward to KJ going to high school. He always said “my guy gone be fresh.” Dominick was part of a group of young men he grew up with. They remained close as they became adults and ventured into their lives. They were more like brothers than friends. He also enjoyed spending time with his siblings. Dominick’s family foundation was established through the love shown by his granny to his mother which poured into him. He prided himself on dressing. He was often heard telling others “I’m Real Deal and I Do This.” Dominick leaves to cherish his memory: his devoted mother Tia E. Buren, his father Reginald L. Farmer, Sr., his loving Granny Rosella Buren, his siblings Kendrick (KJ) Robinson, LaShondra, ReNesha, Jazzmond, Reginald, Jr., ReKendra, Delvin, Ryan, Ronneisha, Reginiqua, DeRamond, and Reshon; two aunts LaQuanna and Sophia Dilworth, three uncles Keith and Jerome (Nancy) Murray, Eddie (Monica) Buren, last but definitely not least, Dominick’s “Bae” Emily Gavin and her two sons, Breylan and Julez Nicholson, and a host of nieces, nephews, cousins, and friends.

The family of Dominick Reshaun Farmer created this Life Tributes page to make it easy to share your memories.

Dominick Reshaun Farmer entered this world with a bright smile...

Send flowers to the Farmer family.