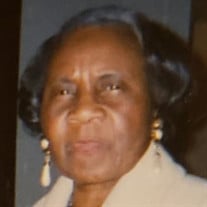 Dorothy “Dottie or Aunt Di” Wickerson was born May 8, 1924 in Batesville, Mississippi to the union of William McKinley and Ethel King Carr. She is preceded in death by her parents, her husband - Ollie Wickerson, brothers - Lawrence Carr, Ronald Carr, James Carr, and Chester Carr, sisters - Juaneva Carr, Mary Carr, and Ernestine Charleston, children - Jimmie Booth, Ruby Carr, Mary “Cat” Carr, and Bernadine “Deanie” Wickerson, grandchild - Robrell Williams. Dorothy transitioned from this life July 15, 2020 to join her family and our Lord Jesus Christ. She confessed a hope in Christ at an early age and joined Cotton Plant AME Zion Church in Batesville, Mississippi and continued her faithful service in Christ at Washington Metropolitan AME Zion Church in St. Louis, Missouri. As the eldest child of 11, Dorothy felt it her privilege to accompany her father Willie to seek a better life for the family outside of Mississippi; they eventually decided to call St. Louis, Missouri the Carr tribe home. On many occasions, even after she began to endure the battle with dementia, she would speak of her and her father looking for a new home for the family. She was a hardworking woman who worked for Walgreens for several decades (retiring twice!), in addition to several other jobs. Dorothy was fiercely devoted to her family and never missed an opportunity to show her love and support, whether it was flying halfway across the country, sewing an outfit, or baking a cake. She didn’t have the greatest cooking skills, but she would always be on the ready to bake a cake for a birthday. Dorothy was also known for her ability to take remaining material from a sewing job to make beautiful clothes for her sisters; they were indeed grateful for her talents. She most enjoyed spending time with her family, traveling, sewing, and dancing. Dorothy was blessed with 96 years to continue to do all the things she loved for as long as she could, in spite of her dementia diagnosis. Dorothy is survived by her beloved children, daughter Donna and her devoted son, Anthony; her sisters Rose Green, Ann White (Sanders) and Thelma Horton, 15 grandchildren, and a host of great grandchildren, great-great grandchildren, nieces, nephews, cousins, and friends.

Dorothy &#8220;Dottie or Aunt Di&#8221; Wickerson was born May 8, 1924 in Batesville, Mississippi to the union of William McKinley and Ethel King Carr. She is preceded in death by her parents, her husband - Ollie Wickerson, brothers - Lawrence... View Obituary & Service Information

The family of Dorothy Wickerson created this Life Tributes page to make it easy to share your memories.

Send flowers to the Wickerson family.