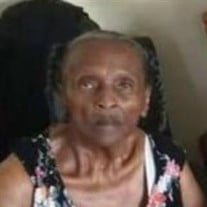 Eloise Brown was a caring wife, Mother, grandmother, and friend. God called her home with him on November 17, 2021, at age 83. For the bible says to be absent from this world is to be in the presence of the Lord. Although we will all miss her dearly, we know that she is resting in the arms of the Lord. She was born to Maggie Dale Baker and George Pruitt on September 17, 1934, in Park Dale, Arkansas. There she met her husband Robert Lee Brown. Being the only child, Elouise's dream was to get married and have children. As she would say "Having one child is selfish." Together they had 8 children. Her husband worked tirelessly to provide for their children. As she was a stay home mom she loved to cook! Later in life, she began to work her first and only job at Bellefontane Habilitation Center as a Development Assistant One for 24 years until retirement, she loved what she did. She had an uncanny ability to find happiness in her daily activities. Working the night shift alone side her daughter Patrice for over 20 years. Elouise and her daughter Patrice also together joined Tabernacle of Faith and Deliverance Church of God In Christ in the early ’80s. Elouise was loyal and dedicated as a servant until she took ill. Although she never stopped praising Him, “I’m saved, sanctified, and filled with the Holy Ghost” she’d say in a blink of an eye. She’d lay hands, Grab her anointing oil to pray for anyone anytime. God first, her greatest love was for her family. She cared deeply for her family and neighbors. She was a mother to many truly. Raised as her own, Tasha Woods while she battled with illness they’re together again. And her great-great-grandson Qulam. After the death of grandson Gale Brown Jr., she took the role of mother at some point in time to a host of grandchildren lives, who still today call her “Momma.” Elouise was preceded in death by her parents George Pruitt and Maggie Dale Baker, her husband Robert Lee Brown, her mother and father-in-law James and Willie Brown, her children Robert Lee Brown Jr., Gale Brown, James Brown, and Patricia Ann Carter. Elouise leaves to cherish her memory: her children Wheirlmelda Brown, Gwendolyn Ruff (Kevin), Baviosa Brown, and Patrice (Arthur) Dixson, Son-in-law Larry Carter, 26 grandchildren, in addition, an abundance of family and friends. Elouise & Robert’s Anniversary was November 20th.

Eloise Brown was a caring wife, Mother, grandmother, and friend. God called her home with him on November 17, 2021, at age 83. For the bible says to be absent from this world is to be in the presence of the Lord. Although we will all miss... View Obituary & Service Information

The family of Elouise Brown created this Life Tributes page to make it easy to share your memories.

Eloise Brown was a caring wife, Mother, grandmother, and friend....

Send flowers to the Brown family.