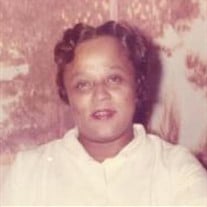 Our Heavenly Father has again summoned one of His faithful servants, Mrs. Estella Charleston Horne, who departed this life on July 26, 2018, at the DePaul Hospital in St. Louis, Missouri at the age of 98. Estella Charleston Horne was born to the union of Ida Rose and Eli Thomas Charleston on February 24, 1920 in St. Louis, Missouri. She was one of five children. Her parents, and four brothers all preceded her in death: Lemuel 1981, Carl 1973, Amroe 1972, and Vernon 2011. Estella, (Sis) was educated in the St. Louis Public School system and worked for many years as a dedicated, vibrant, and sarcastically witty barmaid/assistant manager at Duck’s Lounge. She was a member of Saint Elizabeth’s church and baptized on November 20, 1932. Estella was married to Emmanuel Horne on May 15, 1936. She was an outstanding mother to her daughter, Ida Jean Kitchen, who preceded her in death on June 16, 1983, and an amazing grandmother to her granddaughter, Rita Maria Harris, who preceded her in death on January 5, 1990, and an awesome great grandmother to her great grandson, Michael C. Hayes, Jr. (a.k.a. Da’Amazin) who also preceded her in death on December 18, 2010. she leaves to cherish her memory: one great granddaughter, Anita Diane Watson of St. Louis, Missouri; one great great grandson (Anita’s son) Kenny Millen, Jr. (a.k.a. TheShark); nieces, Lavonne Anita, Valerie Diane, Lynne and Marsulite; nephews, Vernon Henry, John Jr., and Michael, and many other loving great great great nieces, great great nephews, and a host of cousins and friends. Sis will be missed by all who knew her.

The family of Estella Horne created this Life Tributes page to make it easy to share your memories.

Our Heavenly Father has again summoned one of His faithful servants,...

Send flowers to the Horne family.