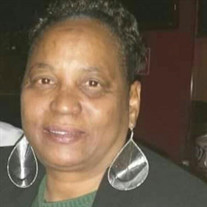 Faith A. Hackney was born January 19, 1961 in Saint Louis, Missouri. She was the fourth child out of eight children, who were born to the union of Ms. Evelyn P. Hackney and Charles "Tony" White. Her parents, Evelyn P. Hackney and Charles White, one brother, Mark "Stevie" Hackney, one son Anthony E. McGee "Pibbs," one grandson Howard E. Bronner III, one grandmother Edith Malone, one grandfather George W. Malone, one aunt Evelyn Harris, three uncles Willie Rule, George, and Connie Malone, one nephew William Hackney, one great nephew Ra'Shawn Hackney, and one great niece Janell Rice all whom preceded her in death. Faith received her formal education in the Saint Louis Public School System. In the mid 80's Faith went back to school and received her C.N.A. license to work as a full-time nurse. Later on, she switched over to the home healthcare field where she enjoyed working for her clients. She loved helping others, and making sure people were fine. She would also feed those who were in need as well. By the mid 90's, Faith had to take an early retirement due to her health, but it didn't stop her from continuing to help people that were in need. Faith was a loving sister, mother, and best friend. She would always speak what's on her mind. She enjoyed being around her family and friends but she also spent a lot of time with her grandchildren most of all. She had a best friend from childhood, Patricia "Pat" Scott, they were like two peas in a pod nonstop. Faith had a longtime companion, Howard E. Bronner Sr., who was the father of her children and also her best friend. Kenneth Hamm was also a longtime companion who was her lover and her best friend as well. Faith will truly be missed by many. Faith leaves to cherish her memory: One daughter Tiffany (Brandon) Foster, one son Howard (Jessica) Bronner, her godchildren Morticia, Tyanna, Cassandra, J.R., and Diona; her grandchildren Carl, Cameron, Cartavion, Little Brandon, Brittanie, Ahzorrelle, Tymir, Devonta, Aniya, Hannah, and Anthony; her sisters Nina Hackney and Tyenetta Hackney; her brothers Lagrant Hackney, Fredrrick Hackney, William Hackney and his wife, and Anthony Hackney; her nieces Sandra, Monica, Amanda, Aleshia, Ashley, Angel, and Anyiah Hackney; her nephews Lewis and James Hackney; three aunts Faith Rule, Martha Young and Carol White; one uncle Michael Malone, and a host of family and friends.

The family of Faith A. Hackney created this Life Tributes page to make it easy to share your memories.

Send flowers to the Hackney family.