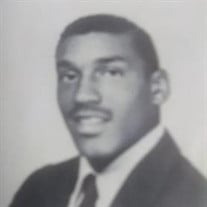 Glenn Arthur Casey was born May 31, 1951, in Saint Louis, Missouri to the union of Harry Casey, Sr. and Carroll Winferd (Brandon) Casey. Both of his parents preceded him in death. Glenn was the second oldest of their three sons. His brother Harry Charles Casey also preceded him in death. Glenn was educated in the St. Louis Public School System. He attended Simmons Elementary school and Turner Middle School. He was proud to be a “Sumnerite” and actively participated in activities concerning the school. While being a “Bulldog,” he attended shop classes, ran track, played football, and was a member of the Jades of Arabesque Social Club. During his senior year at Sumner, Glenn played the trumpet in the senior band and was the senior class of 1969 class treasurer. He was an ongoing member of the class of 1969 reunion committee. Glenn married Sharon on January 23, 1972. To this union, three sons were born Glenn II, Michael, and Brennan. Glenn was employed by Union Electric Company which later became Ameren UE. He retired from UE after 30+ years. Glenn had the gift of gab and love to joke and laugh with his coworkers. He worked hard and was an asset to the company. While at UE, Glenn participated in sports activities, he was a member of the Friendly Club and could be found schooling his coworkers in Bid Whist during breaks. Glenn loved to talk and would regale anyone that listened with stories that would bring a smile to your face, tears of laughter to your eyes, and joy to your heart. His signature word was “AYE” and everyone knew who it was when they heard it. July 1983 Glenn’s life became complete when he married the love of his life, LaDonna Cooper Casey. They were happily married for 37 years. Together they welcomed two more sons into the world, Brandon, and Christian. Glenn A. Casey departed this life on December 17, 2020. His loving wife and five sons were with him until the end. He leaves to mourn his passing: his cherished wife LaDonna, his five Sons Glenn II, Michael, Brennan, Brandon, and Christian; his brothers Kelvin and Erik (Angie), his sister Ingrid (Stan), his aunt Jean; 13 grandchildren Sydney, Jordan, Little Mike, Barry, Johnny, Kyra, Koren, Maxwell, Brennan Jr., Kingston, Skyy, Brandi, and Cherish; two great granddaughters A’aliza Marie and A’Mya Marie, and a host of nieces, nephews, cousins, and friends.

Glenn Arthur Casey was born May 31, 1951, in Saint Louis, Missouri to the union of Harry Casey, Sr. and Carroll Winferd (Brandon) Casey. Both of his parents preceded him in death. Glenn was the second oldest of their three sons. His brother... View Obituary & Service Information

The family of Glenn A. Casey created this Life Tributes page to make it easy to share your memories.

Send flowers to the Casey family.