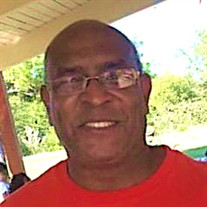 Henry Lee Colbert, age 64, died on Wednesday, April 23, 2020, after suffering a month-long illness. Henry was born in St. Joseph, Missouri to Henry George and Fannie Frances (Smith) Colbert on December 25, 1955. Henry was the 5th of seven children. At an early age, Henry loved sports and continued this love throughout his adult life. He played baseball, football, and basketball in elementary and high school. As an adult, he participated in and attended many sports events particularly those of his family, be it basketball, soccer, wrestling, gymnastics, dance, or football. One could look up and hear Henry in the stands in or out of town cheering either his son, grandchildren, son-in-law, niece, nephew, or friend. However, basketball seemed to be his game of choice. When basketball season starts, Henry is always at a game or watching tv with remote in hand. Anyone who knows Henry is aware that he attended all March Madness games regardless of what city with either his son, granddaughter, sister, friend, or alone. Everyone knew where he would be when March Madness rolled around ----at a game. Henry married Brenda Kay Reed on September 2, 1978. They met and fell in love while both attended Southwest Missouri State University in Springfield, Missouri. To this union was born two children: Krystal Frances (Colbert) Prater and Henry Reed Colbert. Henry lost his wife of 23 years in 2002 after a battle with cancer and was thrust into the role of a single parent. As a husband and a father, he worked hard to provide for his family. After graduating from the university, he began his professional career as a software development specialist with Southwestern Bell Telephone Company. He continued working in this capacity through all of the mergers, company acquisitions, buy-outs, and transitions from Southwestern Bell to AT&T to Amdocs up through his passing. Henry was preceded in death by his parents, Henry and Fannie Colbert; wife, Brenda; two brothers, Howard E. Colbert and Joseph L. Colbert. Living to mourn his passing are: daughter, Krystal F. Prater (Amond); son, Henry R. Colbert; two granddaughters, Aryn and Anaya Prater; one brother, Jewell D. Colbert (Vickie); three sisters, Cordelia F. Whitley, Georgia L. Lee (Allan), and Lurlean M. Hayes (Travis); several nieces, nephews, cousins, and friends. Henry touched many lives and will be forever remembered as a spiritual, loving, caring man who loved his family, friends, church, and sports. He accepted Christ at an early age. He was a devoted member of Bethlehem Missionary Baptist Church where he was a deacon and financial secretary. Private farewell services and public live streaming on Monday, April 27, 2020, at Bethlehem Missionary Baptist Church, St. Louis, Missouri at 12:00 p.m. The graveside services will be held at Laurel Hill Memorial Gardens, Page Dale, Missouri with his parents and grandparents, whom he missed very much.

The family of Henry Lee Colbert created this Life Tributes page to make it easy to share your memories.

Send flowers to the Colbert family.