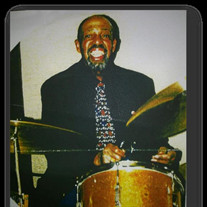 James Percy Thomas was born on February 24, 1929, in St. Louis, Missouri. He was adopted in Infancy by the late George and Myrtle Thomas. He was raised in a loving home filled with the love of the Lord and was baptized at an early age at First Baptist Church in St. Louis. He attended St. Louis Public Schools. In the early 1950s, he met and fell in love with Marcia Washington. They were married on May 1, 1954. They enjoyed lots of travel by train until Marcy’s death in 1994. In fact, James loved trains and had an enormous train set that he operated, complete with conductors, stops lights, and a city that lit up with houses, a church, a school, stores, and even a gas station that he was proud to show off to his guests. He was employed by Maryville College and where he was dearly loved by the faculty and students. He retired after forty-two years of service. He received the “Jim Thomas Service Award Scholarship” for his dedication and outstanding service. Each year a “Jim Thomas Service Award” Scholarship is presented to a deserving student in his name. Music was his inspiration. James was a member of Musicians Local #2-197 in St. Louis, Mo., and was known professionally as “Jim Thomas.” He was a drummer with many local bands. One of his bands was “The Jim Thomas Trio,” which consisted of Eddie Randle, Jr. on bass, Ed Nicholson on piano, and he was the drummer. During his musical career, he met some of the giants in jazz music, including trumpeter Miles Davis and drummer Buddy Rich. James was a fun-loving guy whose sense of humor was infectious. He always had a joke up his sleeve. Although he had no children of his own, he treated his nieces and nephews as though they were his. He was affectionately known to many as “Uncle Monkey” because he had many monkey jokes. He would grab a bunch of kids and induct them in his “Monkey on the Water” club and would swear them in as an official “Monkey on the Water.” Early Monday morning, October 21, 2019, God called James home. He leaves to cherish his memories many nieces and nephews: William Boyd, Gerald Boyd, Colin Boyd, Glenda Boyd Collins, Phillip Boyd, Joseph Boyd, Dorthy Brown, Vickie Brown, Marsha Bryant, Monica Bryant, Emmanual Bryant, Jr., Diane Ikeman, Gayle Ikeman Thomas, Robin Ikeman, Michael Layne, David Payne, Earvin “Glenn” Robinson, and Wayne Rodgers; brother, Bishop Shaw; and a host of other great-nieces and nephews, cousins, relatives and friends. Special recognition and thanks to long-time friends Valura Massey and Wardell Massey, Jr. Preceding him in death were his parents; his wife Marcy; a brother Raymond Ikeman; three sisters, Delphine Boyd-Weir, LaRue Kiethly, and Cordelia Redd; sister-in-love Emily Ikeman; nieces, Loretta Bryant, Telitha Charles, and Linda Ikeman; nephew, Richard Boyd, Jr.

James Percy Thomas was born on February 24, 1929, in St. Louis, Missouri. He was adopted in Infancy by the late George and Myrtle Thomas. He was raised in a loving home filled with the love of the Lord and was baptized at an early age at First... View Obituary & Service Information

The family of Mr. James P. Thomas created this Life Tributes page to make it easy to share your memories.