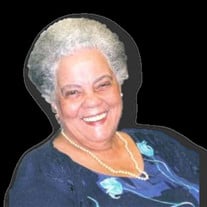 In Lessley, Wilkerson County Mississippi, on June 16, 1927, Jessie Edwina Arnette was born to Leonard Arnette and Marie (Trask) Arnette. This small county in which they lived eventually became known as Woodville, Mississippi. Jessie was the oldest and the only girl that was given to this union. Both her parents and two of her brothers Ernest and Oliver preceded her in death. Burnell continues to live in Georgia. Around the age of ten, Jessie, seeking the educational opportunities offered in Saint Louis moved here to live with her aunt and uncle, Emma and Ernest Williams Sr. There she joined their household and became the big sister to five additional siblings; Norman, Ernest Jr., Edna (deceased), Annette, and Joseph. As a young woman, Jessie joined Lane Tabernacle AME Church. She remained a member of this church until her death. Jessie attended Marshall Elementary School and graduated from Sumner High School in 1945 at the age of eighteen. In that same year on Christmas Day, December 25, she married Elisha Smith a boy from back home. She and Elisha built a life together that span over 43 years until his death in October of 1988. They were blessed with the birth of four children Donald (deceased), Leonard, Leroy, and Cathy. In those many years together, in addition to rearing their children, Jessie and Elisha built the first black-owned plumbing company in the city of St. Louis, E. Smith Plumbing Company. The crowning achievement of this small, family-owned company was their contribution to the building of the internationally recognized symbol, the St. Louis Gateway Arch. Jessie and Elisha loved to entertain. He was a member of the Kings Men Country Club, and with Jessie by his side, he and his buddies hosted many, many well-remembered events in Wentzville, MO. But it was the annual family picnics, hosted on the family grounds that will be talked about for generations. All were welcomed to these shindigs. Family, friends, friends of friends looked forward to these annual events. They came from Mississippi, Louisiana, Michigan, and Florida and even some were said to come from parts unknown. Jessie was recognized for her smile, her laugh, and her love for family. Whenever you would visit her you were prepared for her joking, fussing, teasing and ultimately her genuine concern and love. Her big heart and concern for all extended pass her family. Just ask any neighbor. As a resident of Maple Avenue for sixty-five years, there wasn't much going on she did not know about. She knew the names of all her neighbors and the names of her children's friends and their families. And, they all knew Ms. Jessie. Now anyone who knew Ms. Jessie, Grandma and/or Mom, knew she was a big fan of the Saint Louis Baseball Cardinals. Often during the baseball season, there would be an unexpected telephone call from her with her editorial of the team and the quality of the most recent game. She and her beloved, Edna would converse daily about the team's performance. When they were good; they were highly favored, but when they were bad; there were called a few names that will not be repeated here. Sadly, on Saturday, March 31, Jessie was unexpectedly called home to her final resting place. She leaves to mourn her passing Leonard (Patricia) Smith, Leroy (Suzette) Smith, Cathy (Keith) Raspberry, Deborah Smith and, Burnell Green. Jessie had so many people who loved her and all will miss her terribly including her eighteen grandchildren; Dondi, Demetrius, Reggie, Ryan, Lenny, Jason, Adam, Cynthia, Melanie, Leroy Jr., Leslie, Mikey, Kyle, Stevey Jr., Sherron, Clayton, Shekeita; her thirty-three great-grandchildren, two great-great-grandchildren and many, many cousins, neighbors and friends.

In Lessley, Wilkerson County Mississippi, on June 16, 1927, Jessie Edwina Arnette was born to Leonard Arnette and Marie (Trask) Arnette. This small county in which they lived eventually became known as Woodville, Mississippi. Jessie was the... View Obituary & Service Information

The family of Jessie A. Smith created this Life Tributes page to make it easy to share your memories.