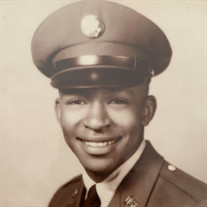 On Friday, February 19th, 2021, Larry Deloney, loving father of two children, grandfather of four grandchildren, brother, uncle, cousin, and friend to many, passed away at the young age of 80 years old. Larry was born August 13th, 1940 in St. Louis, MO to Lucille Deloney. He attended Sumner High School and served honorably in the United States Army. He worked in the insurance field for over fifty years, and was owner and president of Midwest Public Adjusters, Inc. for over 30 years. Larry had a genuine passion for people. He believed in treating people with integrity, dignity, and respect in business as well as in life. For those that know him, he would always have a smile and warm disposition, but could have his moments of stubbornness and cantankerousness. One thing you always knew, he was being real and genuine with you, and would do anything he could to help you. That’s why he was endeared by so many, and is sincerely and deeply missed. Jesus has ahold of Larry now, and he won’t let him go. Larry is at peace with his decision to go home. He is no longer suffering. We will miss him with all our hearts, but let us be comforted knowing he is in a better place. We look forward to the time we’ll see each other again restored in the resurrection of the new world to come which is promised us by our Lord and Savior, Jesus Christ. As Larry would say, “It’s alright. It is what is. It’s going to be ok.” Larry is survived by his sister Peggy, his children, Bryan and Jennifer, his nephew, Jason, his niece, little Peggy, and his grandchildren, Olivia, Hannah, Sidney, and Kaylee.

The family of Larry A. Deloney created this Life Tributes page to make it easy to share your memories.

Send flowers to the Deloney family.