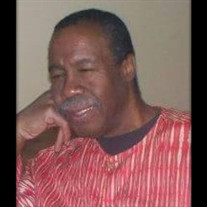 Leslie Dudley Smith was born February 23, 1954 at Homer G. Phillips Hospital in Saint Louis, Missouri. He was the youngest son of Vernice and Sylvester A. Smith, who preceded him in death. Two brothers also preceded him in death; Eric Roderick Smith and Damu (Leroy Wesley) Smith. Leslie was baptized into the Christian faith at Transfiguration Lutheran Church in downtown St. Louis. Although he never joined a church after leaving Transfiguration, Leslie visited a few churches on occasion, and expressed his belief in God--acknowledging Jesus Christ as his Lord and Savior in conversations with his sister, brother, and two of his nieces. He also expressed his belief in the power of prayer. Leslie was educated in the St. Louis Public School system and graduated from Northwest High School. In 2014, he retired as a laborer from the Media Distribution Division of the Federal Government. Some words used by family and friends to describe Leslie are: kind, fun, inquisitive, comical and, at times, stubborn! One neighbor, who remembers him as a child growing up on Carr Street in Carr Square Village, recounts that he was always around to help. She said she could always count on Leslie. At the tender, young age of 40, Leslie became a father to his only son, Leslie Troy. Leslie Troy praises his father for being very wise and an avid reader, who studied and took notes on various topics of interest. “Big Les”-- as some family members affectionately called him--really believed that knowledge was power and he instilled that in his son. In addition to Leslie Troy, Leslie leaves behind to cherish his memory: one sister, Sylnice Williams; one brother, Richard Anthony Smith; one half-sister, Karen Smith Perry; one half-brother, Randy Smith; one nephew, seven nieces, nine great-nieces and nephews and a host of other family members and friends.

The family of Leslie D. Smith created this Life Tributes page to make it easy to share your memories.