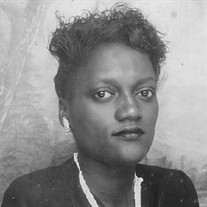 Our heavenly father has summoned one of his faithful servants, Mrs. Loisezee McCleary, who departed this life on August 15, 2018, at the age of 93. Loisezee PearLitha LT McCleary was born August 29, 1924, in Gregory, Arkansas to, Mr. and Mrs. Elmo Wilson. Her mother transitioned after Loisezee was born. She was then raised by her grandmother Laura Wilson and grandfather Nod Wilson. Nod and Laura Wilson were farmers and Loisezee was raised on their farm. Loisezee and her grandmother moved to St. Louis, MO when she was 13 years old and began a new journey. She was educated in the S. Louis Public Schools and attended Vashon High when it was Haley. She worked for many years caring for people, their homes, and their children. Loisezee was baptized at an early age and was a member of Grace Baptist Church for over 30 years. Although she was born Loisezee Wilson she became McCleary when she married Peter McCleary. She was an outstanding mother to 12 children, teaching them what true strength and survival was. She definitely lived a full life. She would always feed and care for other children as well. She also raised several of her grandchildren, including one special granddaughter that she raised from 3 months old, Kallie McCleary. She educated so many people by sharing her wisdom with anyone who was willing to listen. She leaves to cherish her memory: her sons, Wavon, Peter, Bruce (Annie), Gary, Terry and Rickey. Her daughters, Lansceen, Shirley, Pamela, Patricia (Cully), and Kallie McCleary. She leaves a special cousin Juanita Layne. She also leaves a host of grandchildren, great-grandchildren, and even great-great-grandchildren. She was preceded in death by her son Gerald and daughter Augustine McCleary.

Our heavenly father has summoned one of his faithful servants, Mrs. Loisezee McCleary, who departed this life on August 15, 2018, at the age of 93. Loisezee PearLitha LT McCleary was born August 29, 1924, in Gregory, Arkansas to, Mr. and Mrs.... View Obituary & Service Information

The family of Loisezee McCleary created this Life Tributes page to make it easy to share your memories.

Our heavenly father has summoned one of his faithful servants,...

Send flowers to the McCleary family.