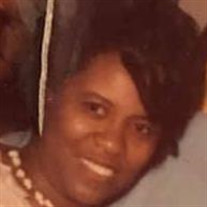 Mae Ola Owens-Rice was born on November 1, 1935, in West Point, Mississippi to Will and Minnie Owens who preceded her in death, her husband, four brothers, and one sister also preceded her in death. She was united in holy matrimony to Sammie L. Rice in 1958, to this union three children Ronald, Pamela, and Oral Smith were born. She was a member of Faith Missionary Baptist Church under the leadership of Pastor Percy Washington until his death in 1996, after which Theodore Williams began to carry the torch. Mae was a faithful member serving wherever there was a need. Mae served until her health began to fail. Mae was a Nutritionist at Bellefontaine Rehabilitation Center until her retirement in 2001. She enjoyed her time with her family and friends helping whenever she could. Mae Ola departed this life on January 10, 2021, at Barnes Hospital when she entered into her rest. Mae Ola leaves to cherish her memories: three children Ronald ( JoJuan) Rice, Pamela (Kevin) Smith, and Oral “Smitty” (Jacqueline) Smith of Seattle, Washington; four grandchildren Brandon, Ronnita, Joshua, and Arielle; three great-grandchildren Amadia, Christian, and King Zamir; four sisters Green Ella Watkins, Anna Ball, Flossie May Shaffer, and Lillie Bell Doss, a host of in-laws, nieces, nephews, other relatives, and friends.

The family of Mae Ola Rice created this Life Tributes page to make it easy to share your memories.

Send flowers to the Rice family.