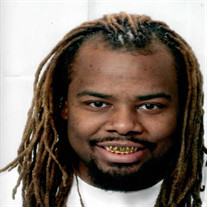 Marcus Nathaniel Williams was born in Saint Louis, Missouri on March 2, 1982, to his parent’s Mark Williams and Marian Henderson. Marcus has two brothers Anthony Henderson, Rodney Lyles, and a very special friend who we accept as a brother. We are thankful for the two special women in Marcus’s Life, the Mother’s of his children, Lonnikah Holmes and Tondra James thank you for giving Punchie and our family two beautiful children to continue his legacy: Marcus Williams and Mariah Williams. Marcus attended the Clayton School District until he transferred to the Pattonville School District where he received his high school diploma. After graduating high school, Marcus attended trucking school, where he acquired his CDL License and began working for Stevens Transport. Marcus was an amazing person with the biggest heart, we Love you so much and we all will miss you. Thank you for being you, Punchie. Thank you for showing us that's it's ok to be yourself no matter what. Thank you for all the good times, smiles and laughter. We are going to miss those good times. Always remember that your present situation is not your final destination. You can’t have life without death, neither can you have success without failure. So we must cherish and embrace each other during our journey and never forget what life really means "Family." From days of lavish through tough times, you never quit instead you tried to find a way through all the circumstances life bought your way. I can still see you today pulling up to Mama house beating the block smiling before saying something funny. Whether you were hustling in four pairs of sweatpants two hoodies and a pair of boots in 104 degrees or just showing us what it looks like to Love, you inspired everyone in your own way. We Love you so much Punchie. Thank you, Mark Williams and Marian Henderson for giving us 38 years of Marcus, Punchie, Crunch, nephew, cousin, Son, Brother, Lover, and Father. In his loving memory, Marcus leaves: his Graceful Father Mark Williams and Lovely Mother Marian Henderson; his two loving brothers Anthony Henderson and Rodney Lyles; his children Marcus Williams and Mariah Williams; his nephew Anthony Henderson Jr., three nieces Anastasia Henderson, Olivia Henderson, and Ivee Grace Fortune; his Aunts Maple Robinson, Shelia Julian, Geraldine Henderson, Tonya Henderson, Gale Bailey, and Ernestine Adair; his uncles Frederick Henderson, Wilford Julian, Ricky Williams, and Lenard Julian (who preceded Marcus in death,) his grandmother Louise Williams, and a host of relatives and friends.

Marcus Nathaniel Williams was born in Saint Louis, Missouri on March 2, 1982, to his parent&#8217;s Mark Williams and Marian Henderson. Marcus has two brothers Anthony Henderson, Rodney Lyles, and a very special friend who we accept as a... View Obituary & Service Information

The family of Marcus Nathaniel Williams created this Life Tributes page to make it easy to share your memories.

Marcus Nathaniel Williams was born in Saint Louis, Missouri on...

Send flowers to the Williams family.