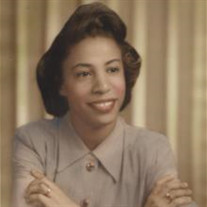 Margaret Louise Beard (nee Fulks) was born on November 10, 1921 in Charleston, Missouri and was the second oldest daughter of Anderson and Alma Fulks (nee Nunn). In addition to her parents, four sisters (Mary Frances, Mamie, Barbara and Alfreda) and three brothers (Anderson, Alfonso and Charles) preceded her in death. Margaret attended grade/high school in Charleston, Missouri, but had to drop out of school at the age of 15 to help her family financially. In 1971, at the age of 49, she went back to school and received her high school equivalency diploma. On January 22, 1944, she married Marshall Jerome Beard (preceded her in death) in St. Louis, Missouri and from this union three children were born: Sherwin Jerome (preceded her in death), Wendell Gerard and Kimerly Ann. She was employed as a domestic worker for two St. Louis families (Horsfield and Droste) for several years until she decided to quit to be a housewife and mother. After she received her high school equivalency diploma in 1971, she started working as a File Clerk at Emerson Electric Corporation. In 1974, she accepted a position in the Blueprint Department at McDonnell Douglas Corporation, retiring in 1986. Margaret grew up in the Perry Chapel AME Church in Charleston, Missouri and served on the Junior Usher Board. She became a member of the Visitation and Blessed Sacrament Catholic churches while her children (Sherwin, Wendell and Kimerly) attended those schools. On Sunday, November 11, 1979, Margaret united with the Greater Mount Carmel Baptist Church under the leadership of Pastor Earl E. Nance, Sr. She became a member of the Senior Usher Board, Group 4 in 1991 and remained a faithful servant until her health began to fail in 2006. Margaret had two hobbies that were important to her: dancing and playing the organ. Her father Anderson introduced her to several types of dancing: tap, ballroom, etc. while she was growing up. She loved to reminisce about the different school plays where she was able to demonstrate her dancing talents. In 1987, she joined the St. Louis Area Fred Astaire Dance Studio where she traveled and competed in several regional and national dance competitions earning several 1st and 2nd Place ribbons. In 1985, she started taking Hammond organ lessons which gave her the capability to play by ear only. She enjoyed playing her Hammond organ every day until her health began to fail in 2006. Margaret transitioned peacefully at DePaul Hospital on Thursday, October 8, 2020 at 10:00 am. after a very brief illness. She leaves her children to cherish her memory: Wendell and Kimerly (James), grandson (Sherwin, Jr.), nieces: Mary Frances Branch, Deanna Patterson (Kenneth), Alma Marie Auberry (Henry), Donna Lynn Green and Charlotte Jackson-White; nephews: Ronald Hamilton (Bertha) and Richard Jackson (Shirley), several great nieces and nephews, her extended family at the Crystal Creek Nursing Center, the Senior Usher Board and her Greater Mount Carmel Baptist Church family.

The family of Margaret Louise Beard created this Life Tributes page to make it easy to share your memories.

Send flowers to the Beard family.