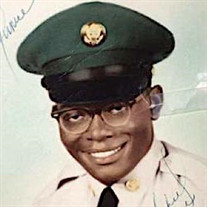 Michael Anthony Fleming was born December 13, 1940, in St. Louis, MO to Henry and Estelle Fleming. He was the third of seven children. Michael attended Newstead Missionary Baptist Church when he was a child and accepted Christ as his Lord and Savior at an early age. As a teenager, he often taught children’s Sunday school. His younger sister Gloria stated, “He always made it fun and interesting”. A bright student and avid learner, Michael graduated from Soldan Highschool in 1958. He then proceeded to attend Harris Teachers College (Now Harris Stowe State University) to pursue a degree in education. His studies were interrupted in 1964 when he was drafted by the U.S. Army due to the Cuban Missile Crisis. He was trained as an Army Security Officer and would serve for two years, being honorably discharged in 1966. He resumed his studies and received his teaching degree from Barry College in Miami Florida. Because he had taken several science courses in addition to his education curriculum, Michael was able to obtain a position as a middle school science teacher for Miami Dade County. He taught for fifteen years, retiring in 2001. During his teaching career Michael touched the lives of many students from around the world. Prior to teaching, he worked in a federal healthcare program for the government. While attending Harris Teachers College, Michael met a beautiful and humble young lady named Eunice Mc Intyre who would become the love of his life, future bride, and lifelong companion. They would marry June 30th, 1965 in Florida and remain married for fifty-five years. Both educators, they enjoyed playing tennis, traveling, and attending church together. For their 25th wedding anniversary, they were able to travel to Israel, Germany, and Jamaica. Their 50th wedding anniversary allowed them to fulfill their mutual wish to see the Billy Graham Museum in Asheville, North Carolina. The church has always played a very important role in the Fleming household. While living in Miami, Florida, he and Eunice attended Morning Star Baptist Church. Continuing their calling as educators, they both taught AWANA and dedicated their lives to helping underprivileged children, often taking them on trips and beautiful Christmas outings. In 2006 the Flemings relocated to Deltona, Florida and became members of Deltona Alliance Church in 2007. Michael served as a Deacon and was known as a “true prayer warrior”. He and Eunice also taught Sunday service at De Bary Manor Nursing Home for fourteen years, only stopping due to COVID. He was loved by many in the congregation and nursing home. His absence will truly be felt. Affectionately known as “Tony” by his siblings and “Uncle Mike” by his nieces and nephews, he was always willing to lend a helping hand or a word of wisdom and guidance. He took genuine interest in our lives, and was there to pray, encourage and lift us up whenever needed. Michael was called home on September 17th, 2020. He was a man who truly loved his family and loved serving the Lord. His love and light will be missed all. Time takes away the edge of grief, but memory turns back every leaf. His life a beautiful memory, his absence a silent grief. He sleeps in God’s beautiful garden in the sunshine of perfect peace. Michael was preceded in death by his parents, Henry and Estelle Fleming and three siblings, Kenneth Love, David Fleming and Joseph Fleming. He leaves to cherish his memory his loving and devoted wife of fifty-five years Eunice Fleming, two brothers, Henry Fleming and Samuel Fleming both of Saint Louis, MO, a sister, Gloria Kendall of Richmond, VA, Two brothers-in-law Ronald (Sandra) Mc Intyre of St. Louis, MO and Charles (Eva) Mc Intyre of Indianapolis, IN, and one sister-in-law Sandra(Martin) Lake of St. Louis, MO. and a host of cousins nieces and nephews.

Michael Anthony Fleming was born December 13, 1940, in St. Louis, MO to Henry and Estelle Fleming. He was the third of seven children. Michael attended Newstead Missionary Baptist Church when he was a child and accepted Christ as his Lord and... View Obituary & Service Information

The family of Michael Anthony Fleming created this Life Tributes page to make it easy to share your memories.

Send flowers to the Fleming family.