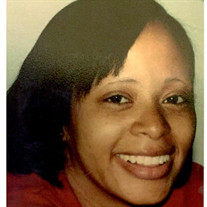 Michelle Yvette Green was born on December 25, 1969, in St. Louis, Missouri to Marion Henderson and Samuel Bernard Green. Her father Samuel, brother Kevin, and her paternal grandmother, Catherine Bedford, better known as “Grandma Kitty,” preceded her in death. Michelle attended the St. Louis City Public Schools, graduating from Northwest High School. After graduation, she attended Drake University in Iowa, earning a Bachelor’s Degree. While at Drake University, Michelle pledged Delta Sigma Theta. Over the years, she remained a loyal and dedicated member of the sorority. Thereafter, Michelle attended the University of Minnesota, where she received her law degree. After passing the Missouri Bar Exam, Michelle started her legal career. The practice of law soon became a passion for her. While practicing at the law firm of Caldwell, Hughes, and Singleton, Michelle specialized in both Family and Traffic Law. This is where Michelle met her friend Shirley Bryant, who would become invaluable in assisting Michelle during her debilitating state. After leaving Caldwell, Hughes, and Singleton, Michelle opened her private practice in the Shell Building, located in the downtown area, specializing in both Personal Injury and Traffic Law. One of Michelle’s greatest life accomplishments was that of a mentor. She had so much passion and love to give to the youth. Michelle spent a lifetime instilling knowledge, wisdom, values, and love into her niece, “Little Michelle a.k.a. Michelle Jr.” and cousins Kayla and Kris. As a beloved Aunt, she was a huge light in “Little Michelle’s” life that will never be extinguished. Over the last several years, Michelle’s health began to decline, which resulted in her becoming a resident at Delmar Gardens North. Even under these circumstances, she never lost her sense of humor or her opinionated views. Her abilities as a lawyer were enhanced by her stubbornness and sharp tongue. Many of Michelle's friends can attest to this side of her personality. As an adult, Michelle attended Cote Brilliante Presbyterian Church and later received visits from the Chaplain at Delmar Gardens North. Michelle departed this life on Tuesday, November 22, 2016 at Delmar Gardens North under hospice care. Michelle leaves to cherish her memory: her mother, Marion; her brother, Michael; her grandparents, Robert and Delores Waters; nieces, Little Michelle, Krystal and Aaliyah; nephews, Elijah, Kevin and Michael Jr.; aunts, Barbara, Linda (Benny), and Pat (Rodney); uncles, Bobby (Yvonne), Jerry (Charlotte), and Kenny (Mary), and a host of relatives and friends.

The family of Michelle Y Green created this Life Tributes page to make it easy to share your memories.

Send flowers to the Green family.