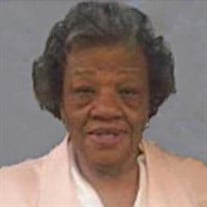 Mother Eva Mae Taylor was born on February 9, 1934, in Drew, Mississippi, to the union of Abram and Mazella Cauley (Pilcher). Eva was the second of two children born unto this union. Both parents and brother (Robert Cauley) preceded her in death. Eva was blessed with four additional siblings later in life. Mother Taylor received her education from Dunbar Elementary School and graduated with the Vashon High School Class of 1952. She strongly encouraged others to pursue the highest level of education. Mother Taylor was employed by Midwest Handbag Company and Biederman’s Furniture Store. She was also employed by McDonnell Douglas Corporation for 18 years until her retirement in 1992. On September 2, 1962, Eva Cauley was united in holy matrimony to the late William V. Taylor in St. Louis, Missouri. To this union, one son was born. Mother Taylor professed her faith and accepted Jesus Christ as her Lord and Savior at a very early age, under the leadership of the late Rev. Watkins, at New Salem M.B. Church. While at New Salem, she was an active member in the choir and served as the church clerk. In 1979, she became a member of the Memorial M.B. Church family under the leadership of the late Rev. Seanes Boyce, Jr. While at Memorial, she served as the President of the Missionary Society for 39 years. She was a faithful servant as a choir member, Sunday School teacher, and as a member of the Mother Board. Mother Taylor faithfully attended weekly Bible classes and prayer meetings. On Friday, August 10, 2018 the Lord suddenly called his faithful servant home. She leaves to cherish her memory, one devoted son, Michael Taylor; a very special and devoted daughter, Michelle Taylor; four grandchildren, Brandon, Bronson, Dontae, Dakota; one brother, Eric Cauley; three sisters, Sonji Cauley, Daphine Cauley, Vernetta Cauley; three niece-like daughters, Pat Houston (Tyrone), Sheila McFadden, Tonya Rivers (Will); three nephew-like sons, Kelvin Ellison, Sr. (Tina), Terry McFadden, Andre McFadden (Melissa); two special cousins, Ivory Ellison, Sylvester McFadden; and a host of nieces, nephews, cousins, friends, and her beloved Memorial M.B. Church family.

Mother Eva Mae Taylor was born on February 9, 1934, in Drew, Mississippi, to the union of Abram and Mazella Cauley (Pilcher). Eva was the second of two children born unto this union. Both parents and brother (Robert Cauley) preceded her in... View Obituary & Service Information

The family of Mother Eva Mae Taylor created this Life Tributes page to make it easy to share your memories.

Send flowers to the Taylor family.