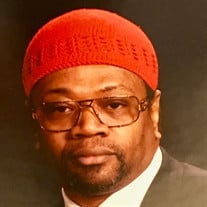 Paul Lee Antonio Naugles was born April 3, 1968 to Paul and Shirley Naugles in St. Louis, Missouri. He regularly attended church with his “Big Mama” and family at Morning Star Missionary Baptist Church. This is where Paul learned about the Lord and his Mercy and Grace and finding his way in the word of God. Paul was educated in the St. Louis Public Schools, University City School District, and Chicago Public Schools. He attended Pershing Elementary and then went to Chicago for some of his middle school years. He graduated from Vashon High School in 1986 and then went to college at Central Missouri State University-Warrensburg under a football scholarship. He later completed his education at Vatterott College where he received his Associates Degree in Engineering. In 1999 Paul was united in holy matrimony to Kelly Easley. Paul brought a daughter Deidra Naugles, and Kelly brought a daughter Michael Ann King (nee Polk) and one son Ryan Wilkerson into this union. The marriage was blessed with two more children, daughters Tyler and Dallas, and later twin sons Jadyn and Jalyn were added to this blended family. Paul started his journey in Masonic Order in 2007 when he became a member of Cable Tow Lodge. He felt the Masonic Order would help him grow and develop into a better man and he also wanted to follow his Grandfather in the Order. During his Masonic career, Paul was also a member of Holy Royal Arch Masons #59, the Eureka Consistory #29, a noble of Medinah Temple #39, Archway Chapter of the Phylaxis Society, the Worthy Patron of Phoenix #81 Order of Eastern Star, and a member of St. Mary Magdalene Court #1-32 of the Heroines of Jericho. At his passing, he was a proud member of Albert Holman Lodge #179 where he served as the Senior Deacon. Brother Paul entered into the Lord‘s presence early Thursday morning, October 26, 2017. He leaves to cherish his memory: his grandmother Luvetra Johnson; his mother Shirley Johnson (nee Williams, Naugles;) his father Paul Naugles; his devoted and loving wife Kelly; four daughters Deidra, Michael Ann, Tyler, and Dallas; three sons Ryan, Jadyn, and Jalyn; eight grandchildren; two brothers James and Paul, five sisters Lilia, Erica, Anjenette, Christy, and Chaye, and a host of aunts, uncles, nieces, nephews, cousins and friends.

The family of Paul Lee Naugles created this Life Tributes page to make it easy to share your memories.

Send flowers to the Naugles family.