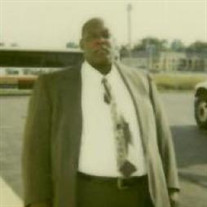 Richard Anthony Underwood was born on Tuesday, February 7, 1956, in St. Louis, Missouri. His mother Marian Underwood brother Darron Underwood and grandmother Annie Mae Underwood all preceded him in death. Richard confessed his hope in Christ at a very early age at the Training Center for Service under the leadership of Walter Short. Richard was a very active member of West Bethel Missionary Baptist Church under the leadership of Dr. Rev. A.B. Jackson where he served on the Deacon Board until his death. Richard graduated from Vashon High School where he played the clarinet in the band. He later attended St. Louis Christian College where he studied theology. Richard worked as a forklift driver for Contico Warehouse. He also worked at Shriner's hospital for a very short period of time, also a Buyer for a large retail store. Richard became a security officer for Guardmark Security where he retired. Richard was known to many as “BIG MAN.” BIG MAN was always so giving to others. He did mind giving his last to those in need. Richard, BIG MAN was a family-oriented man; he had a passion for kids. Richard married Alma Chestnut on May 7, 1988. Richard had no biological children of his own but he accepted two children of love as they were his own; Natavis and Alicia Chestnut. They loved him as he was their biological father. Richard departed this life on Saturday afternoon, May 15, 2021, when he was called to his home in glory. He leaves to cherish his memories: his wife Alma Chestnut Underwood, two children Natavis (Nikki) and Alicia, five grandchildren Jordyn, Chase, Kaden (“Bobble heads”), Hayden, and Carter; his siblings Darryl (Brenda), Debbie (Steve), Sharon, Lois, and Cynthia (Aaron) and a host of nieces, nephews, cousins, and friends.

The family of Richard Anthony Underwood created this Life Tributes page to make it easy to share your memories.

Send flowers to the Underwood family.