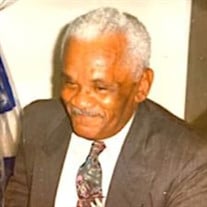 Robert Lee Brown was born on July 18, 1928, to proud parents James and Willie Brown in Parkdale, Arkansas. Robert received his education in Parkdale, Arkansas. He later met Elouise Pruitt. Robert and Elouise were married on November 20, 1948, and to this union, eight children were born. Robert was a very strong man and worked as a construction worker until he became ill. Robert enjoyed going fishing, cooking, watching sports and old western shows on TV, and working on cars was another passion for him. Robert taught his children how to clean and cook fish as well. Robert was a great father and grandfather. He lived a long prosperous life where he enjoyed five generations of loving and caring for his family. He was a very generous man and would have helped anyone in need. He was preceded in death by his parents James and Willie Brown, his mother-in-law Maggie Baker, his children Robert Lee Brown Jr., Gale Brown, James Brown Jr., and Patricia Ann Carter; his siblings Aaron, Isaac, Lillie Ann, Elizabeth, Annie Mae, Mary Lee, Annette, and Alvin. Robert leaves to cherish his memory: his loving wife Elouise Brown, his children Wheirlmelda Brown, Gwendolyn Ruff (Kevin), Baviosa Brown, and Patrice (Arthur) Dixson; great-grandson whom Robert raised, Qu’lam Brown, one son-in-law Larry Carter, 26 grandchildren, in addition, an abundance of family and friends.

The family of Robert Lee Brown created this Life Tributes page to make it easy to share your memories.

Send flowers to the Brown family.