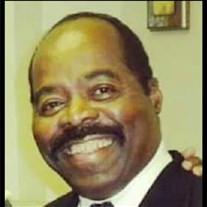 ROBERT WILLIAM SPAIN was born on March 2, 1948, in Saint Louis, Missouri and transitioned at home August 30, 2018. He was the third and youngest child of Eva Rae Yates Spain and John Otis Spain Jr. Preceding Robert in death were his mother, father, and sister, Janice Spain Goodwin in August 2001. Robert attended Banneker Elementary School and was president of his class. He then attended Vashon High School where he earned academic honors, lettered in track and football, was elected president of the Vashon High School class of June 1965 and became a lifelong advocate for Vashon. He received academic and athletic scholarships from Washington University, Kansas State, Missouri University and Bowdien College. Robert completed five years of pre-med, pre-pharmacy education through Washington University, St. Louis Community College and the University of Missouri St. Louis. While attending college, Robert worked as a research analyst at Ralston Purina. (He was one of the first analysts to research and develop the “Jack-in-the-Box” hamburger). After leaving Ralston Purina, Robert acquired his first sales position with Pitney Bowes where he set up a national contract with Western Union and ranked in the top 10 in the nation three times in one year for outstanding sales. Corporate Rexall Drugs heard of Robert’s sales abilities and offered him a position as Senior Sales Consultant. During his tenure with Rexall, he set up new stores in Southern Illinois, Lexington and Louisville, Kentucky. Upon his return to St. Louis, a new chapter in his life began in automobile sales. It was his passion until his death. His auto sales accomplishments include General Motors Training Academy graduate, first African-American Oldsmobile Sales Manager in St. Louis, first African-American Independent new and pre-owned auto dealer that was financed by GMAC. First African-American Independent new car leasing and rental car company financed by GMAC; Boatmen’s Bank and Mercantile Bank. In addition to his automobile accomplishments; Robert was CEO of Triad Productions (an entertainment production company); CEO of ARS Records. He booked talent locally and nationally. He was a member of Kappa Alpha Psi Inc. fraternity. From his very many involvements, the most endearing were those that involved the Vashon High School where he served as a volunteer track and football coach for over 20 years. He served as alumni booster for the girls’ track, soccer, volleyball teams, and the boys' baseball teams. He was a member of several committees that included anti-drug, National Honor and student advancement. His most treasured accomplishment was serving as Chairman of the Save Vashon Alumni Committee, on which he and a dedicated group worked diligently and steadfastly to ensure that the new Vashon High would be built. He and the committee met with Judge George Gunn and convinced him to support their efforts. After several minutes of discussions and evaluations, Judge Gunn agreed that a new Vashon High School should be built. That significant accomplishment hence had been achieved. Robert leaves to celebrate his homegoing: his wife of 20 years Damitra, his brother Ronald (Kim) Spain, his daughter Lynetta Monay (Tonya), his son Jason Robert (April) Spain, McKenzie Alexandra Spain, Myles Kristopher Spain, (his oldest son Kris Ronell Spain preceded him in death April 1999); granddaughter Arayahna, grandson Anthony and Victoria Spain; all the rest of his family, nephews, nieces, friends, and the Wild Bunch.

ROBERT WILLIAM SPAIN was born on March 2, 1948, in Saint Louis, Missouri and transitioned at home August 30, 2018. He was the third and youngest child of Eva Rae Yates Spain and John Otis Spain Jr. Preceding Robert in death were his mother,... View Obituary & Service Information

The family of Mr. Robert William Spain created this Life Tributes page to make it easy to share your memories.

Send flowers to the Spain family.