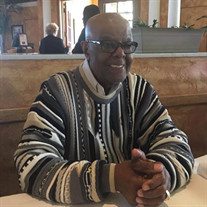 Robert Lee Ward (Dad), 87, passed away on February 10, 2022, at 2:15 pm from a long valiant battle with MDS (myelodysplastic syndrome). Dad was born on March 18, 1934, in Armorel, Arkansas to Rosie Lee Williams and Isom Ward. He had a large family; ten siblings. He is preceded in death by his wife, Mary Margaret Ward; his daughter, Sandra Ward; his parents, Rosie Lee Williams and Isom Ward; several brothers & sisters: Sylvester Ward, Ethel May Nobles, Carolyn Williams, Jean A. Reynolds.; Robert Earl Williams, Paul Williams; niece, Sherry Reynolds. Dad had the greatest work ethic on earth. He worked faithfully for Taystee Bread (later became Wonder Bread) until retirement at around 62 years of age. I recall Dad saying that he never missed a day of work, and I can believe that. He advanced to management (Lead) and was very very proud of the work he did there. He also enjoyed fishing, hunting, working in the yard, working on his car, feeding the birds, music/dancing, and sharing his honest opinion on things. People loved his honesty! That’s what made Dad so unique. He was also a faithful member of Antioch Baptist Church where he diligently worked in the food pantry, was a Deacon, and helped out wherever he could as long as he was physically able. Being a part of Antioch changed his life tremendously for the better. He developed a relationship with Jesus Christ, who became his Lord and Savior. And because of this relationship, I’m assured THAT I WILL SEE MY DADDY AGAIN. Dad is survived by his loving and devoted daughter, Kimberly Cheryl Ward; a friend who was like a son to him, Steve Jones (Becky); loving sisters Mildred McAlister, Frankie Jean Henderson; brother Ludorce Williams (Sandra); amazing grand/great-grandchildren, Qiana Ward (Jarred), Kennedi Ward, Julian Ward, Dakota Ward, Julian Ward Jr., Antonio Ward, Briana Ward, Aaryn Danielle Ward, Ahmir Anderson, Antonio Ward Jr., Brittany Ward; a host of nieces and nephews including Rod Ward (Kendra), Kevan Ward (Tania), Ronnie Ward (Valerie), Yvette Jacox (Bobby), Denise Ward, Rhonda Mack, Paul Nobles (Beverly), Sharon Nobles, Gloria Nobles, Jerome Nobles (Jaqueline), Ann Nobles, Kevin Nobles, Brad McAlister (Arina), Brandon McAlister, Byron McAlister, Juan Henderson (Heidi), Gaye Booker (Richard), Tracy Williams, Keith Williams (Anne), Richelle Reynolds, Curtis Reynolds, Nicky Reynolds, and many many more! He is also survived by many awesome friends that he really loved (e.g., hang-out buddies, McDonald's crew, church friends, etc..). Special Shout Out to the White Castle Crew. He truly loved you all!!!!! You all made maneuvering this pandemic for him more bearable. (Note: If we missed anyone, it was not intentional. Grace please). Dad was affectionately known by me (Kim) and my friends as “The Dadster”. I will truly miss him and this will be a HUGE adjustment in my life. But, when it’s all said and done, all I know is that God is faithful and will give me and his close family the strength we need to get through this.

Robert Lee Ward (Dad), 87, passed away on February 10, 2022, at 2:15 pm from a long valiant battle with MDS (myelodysplastic syndrome). Dad was born on March 18, 1934, in Armorel, Arkansas to Rosie Lee Williams and Isom Ward. He had a large... View Obituary & Service Information

The family of Robert Lee Ward created this Life Tributes page to make it easy to share your memories.

Send flowers to the Ward family.