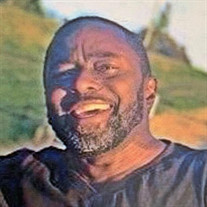 Vincent Eric Cobb Sr. (also known as “Vinnie, Big V, Pops, and Papa”) was born December 25, 1961 to Elmer and Alean Cobb, in Saint Louis, Missouri. Both of Vincent’s parents predeceased him in death. Vincent was educated in St. Louis Public Schools, and he graduated from Sumner High School. Vincent was the only child to his parents, and the only grandchild to his grand-parents, and they worked very hard to give Vincent a good life. At the tender age of 18, Vincent’s grandmother, Lula Parren, purchased him his first gold Cadillac Seville. Vincent professed his love for Christ at an early age, and often spoke of his relationship with God. Vincent loved his family dearly, and he possessed a deep love for his son, Vincent Cobb Jr., and his three “grand-babies,” Vinaz Cobb, Tycen Cobb, and Vyce Cobb. Some of his last wishes included making sure they would be taken care of after he was gone. Vincent also deeply cherished his relationship with his step-sons, and their children, whom he also called his “grand-babies”. Nothing in the world made Vincent happier than spending time with his grand-babies. Some of Vincent’s favorite past activities included watching classical movies and shows, listening to music, attending his grandsons’ football games, and hanging out with his friends from the neighborhood that he had known nearly his whole life. Vincent was known by all for his outgoing personality, hospitable demeanor, sweet compliments, loud voice, and charming smile. Vincent departed this life for eternity to be with the Lord on Thursday, April 2, 2020. Vincent leaves to cherish in memory, his beloved son, Vincent Cobb Jr., whom he called “Lil Vinnie.” These two were best friends, and they were very protective of one another. “Lil Vinnie” took very good care of his father, and provided him with some of his most prized possessions. While Vincent Jr. is very saddened by the loss of his father, he finds peace in knowing that he is now in Heaven with his parents and grandparents, whom he missed very much.

The family of Mr. Vincent Eric Cobb Sr. created this Life Tributes page to make it easy to share your memories.

Send flowers to the Cobb family.