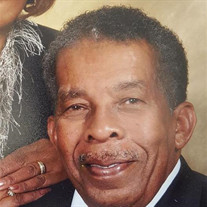 Life Reflections Mr. William Edward Fort was born February 22, 1939, in Columbus, Mississippi to parents Kermit and Helen Fort who both preceded him in death. His oldest son, Garland Rodgers, also preceded him in death. William moved to East St. Louis, Illinois when he was four. He attended Elementary and Junior High School in East St. Louis and then moved back to Columbus MS, where he attended and graduated from Hunt High School in 1959. After graduating high school, William decided to serve his country. He joined the United States Army and served from 1960 to 1963. His military service included a tour in West Germany and Korea, after which he received an honorable discharge. William called St. Louis, Missouri home after completing his service in the military. Here he started working at Famous-Barr. He then met Bessie (Harlan) and they married on November 29, 1964. From this union, four sons were born: Kevin Durand, Duane (who preceded him in death), Keith Aaron, and Derrick Durond. In 1965, William started working at the GM Assembly Plant (St. Louis and Wentzville) where he worked for 30 years, until he retired. William accepted Christ in his life and spent many active years at Christ Community United Methodist Church (formerly Bowman UMC). He was always eager to respond to the call whenever needed. He was one of the founding members of the United Methodist Men, a member of the Board of Trustees, worked in the food pantry, served as the Church Treasurer, and was a member of the church community garden. William was active in the United Automobile Workers labor union. When he wasn’t spending time with his boys or his grandchildren, he watched Westerns and Sports on TV with a never-ending cup of coffee. On November 24, 2017, at 8:57 pm, God decided he needed another special angel, so he called William home to eternal rest. William Fort leaves to cherish his memory: his wife Bessie Fort, 3 sons Kevin Fort (Tammy Smith) of St. Louis, MO., Keith (Dr. Jill) Fort of Wichita, KS, Derrick (Monique) Fort Sr. of St. Louis, MO., 1 sister, Mildred Fort of East St. Louis, IL. 2 brothers, Kermit Fort of Swansea, IL. and David Fort (Kim) Sr. of Swansea, IL. A brother in law, Joe Harlan of Fayetteville, North Carolina. Seven grandchildren, Renesha Hopson, Kelton Fort, Alexis Guy, Derrick Fort Jr., Cameron Doss, Travis Green III, and Kaleb Fort. Two great-grandchildren, Julius Lavell Jones Jr. and Kerry Bonnett III; A host of cousins, nieces and nephews, grandnieces and grandnephews, and loving friends.

The family of William E. Fort created this Life Tributes page to make it easy to share your memories.

Send flowers to the Fort family.